Imagine a 16th century stuccoist working away at his bench. Wet plaster and tools in hand, hastily wiping unneeded plaster away on the edge of his table. Did he spill some pigment on this area of the table? Does it mix in with the wet plaster and rust from his tools? Do small chips and variants find their way into this discarded pile of ever hardening plaster mix? Is this how scagliola came to be? Imagine his surprise when attempting to cut the lumps off his table when one is sheared in half, and he sees a beautiful marble like pattern there before his eyes.

This may be how traditional scagliola techniques were first invented, by sheer luck of an inspired plaster craftsman. Its impossible to know for sure, but after many years of being a closely guarded secret by the few who produced it, scagliola experienced a explosion in use via the Catholic church in their attempt to fill the pews and turn their congregations eyes to the heavens.

The technique of Marezzo scagliola involves getting the main pigmented plasters very wet until it is has a consistency very much like yogurt. These are thrown over top of silk strings called "skeins" that have been soaked in liquid pigment. When all of the skeins are covered and all of the pigment has been thrown over in various swirling patterns, the skeins are pulled up through the plaster, leaving their pigment behind in a pattern that resembles the thin veins of marble.

This technique is different in a few ways from traditional scagliola, but both can be very beautiful. Marezzo is very popular in America although the U.K. has its fair share as well. Both of these techniques as well as Inlaid scagliola are covered in much detail in the book. I even teach you every step of their creation so you can do it yourself.

The traditional technique which involves mixing the pigments and plaster into a dough like consistency before cutting and laying it in various ways, was the only way anyone knew how to make scagliola for a very long time. That is until the Marezzo,  or, "American" scagliola technique was created.

The magic of scagliola

Scagliola has been my life's work, and here I am promoting my new book, "The Magic of Scagliola" in an attempt to inspire others as I have been inspired, and maybe even save a wonderful old craft. 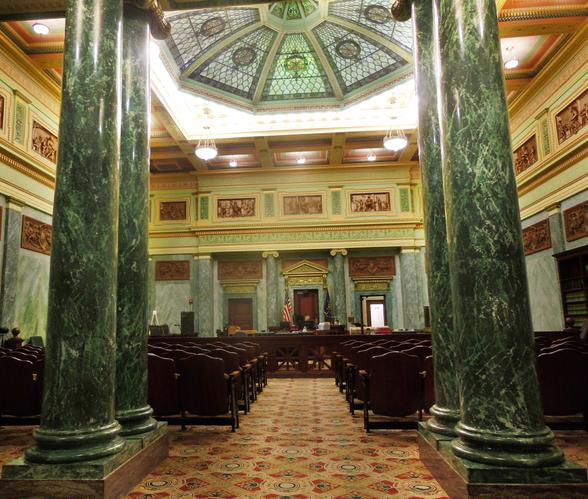 Scagliola is a hand-made artificial marble created by mixing gypsum plaster with water, glue and different pigments. After it has set hard, the scagliola surface is cut back, honed down and polished to look like marble. The word "Scagliola" can be deceptive, meaning different things in different languages. It is derived from the Italian word "Scaglie" meaning small splinters or chips of stone. However, when the Italians, Germans and French use the word "Scagliola", they are not referring to the artificial marble but to the technique of using different mixes together to produce pictures and patterns. Their definition therefore is "Pietre Dure" done with artificial marble, which is a technique of marquetry carried out using pieces of different marbles, agates and semi-precious stones. Scagliola is seen in buildings and craftsman homes around the world.

I am Professor David Hayles. The Magic of Scagliola Author, Artist, Craftsman, World Traveler. I have spent most of my adult life making and refurbishing scagliola. I started the company Hayles and Howe in the early 80's. It now has a branch in my home country of the United Kingdom and a branch in the United States. They undertake many large projects restoring and crafting plaster and scagliola. Some of the most notable of these while I was still the CEO are the Capitol Building in Washington D.C; Buckingham Palace in the U.K; and the Courthouse in Fort Wayne, Indiana where there is more marezzo scagliola then any other building in the world.

In the above photo, you can see me, my son, and the current CEO of Hayles and Howe, David Harrison.

If you are interested in interior decorating, need interior design ideas, or just want to have a faux marble floor, wall, column or tabletop, the magic of scagliola is for you.

To learn more about me click here: About Me 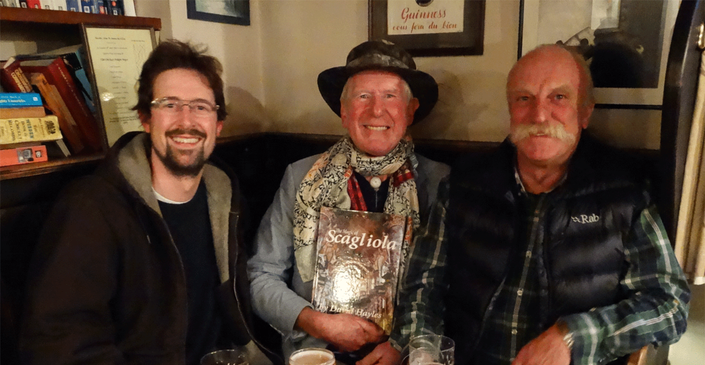 I am David Hayles